Status of ITS resources

The College of Education at Kansas State can trace its lineage back to courses in vocational education, which were begun in the late 1890's. In 1900, a Department of Rural and Vocational Education, headed by Edwin L. Holton, was established. Professor Holton also served as Director of the summer school programs.

For the next fifty years, teacher education at both the undergraduate and graduate levels was offered by the Department of Education within the Division of Arts and Sciences. The Department's primary function was service, as it offered no undergraduate degrees, due, in part, to the existence of "normal schools" in Emporia, Pittsburg, and Hays, whose primary emphasis was teacher education.

It wasn't until 1950 that the Board of Regents authorized a teacher education program at Kansas State; but by 1954, the program had achieved full accreditation from the American Association of Colleges for Teacher Education.
In 1962, a School of Education, with budgetary ties to the College of Arts and Sciences, was created; William H. Coffield was named as the first Dean of Education. In 1965, the Board of Regents approved the establishment of the College of Education as an independent academic unit. Three years later, the College's highly visible Ph.D. programs were launched.

Housed in Anderson Hall and buildings across campus, the locus of education programming shifted to Education Hall (later renamed Holton Hall). After its completion in 1981, Bluemont Hall was dedicated as the home of the college.

The new building provided significant space for an Instructional Media Center, later to become the Catalyst. Supported by donors, the college more recently added the Harris Room, the Bluemont Bell and tower, the Holen Courtyard, and the Bluemont Circle. 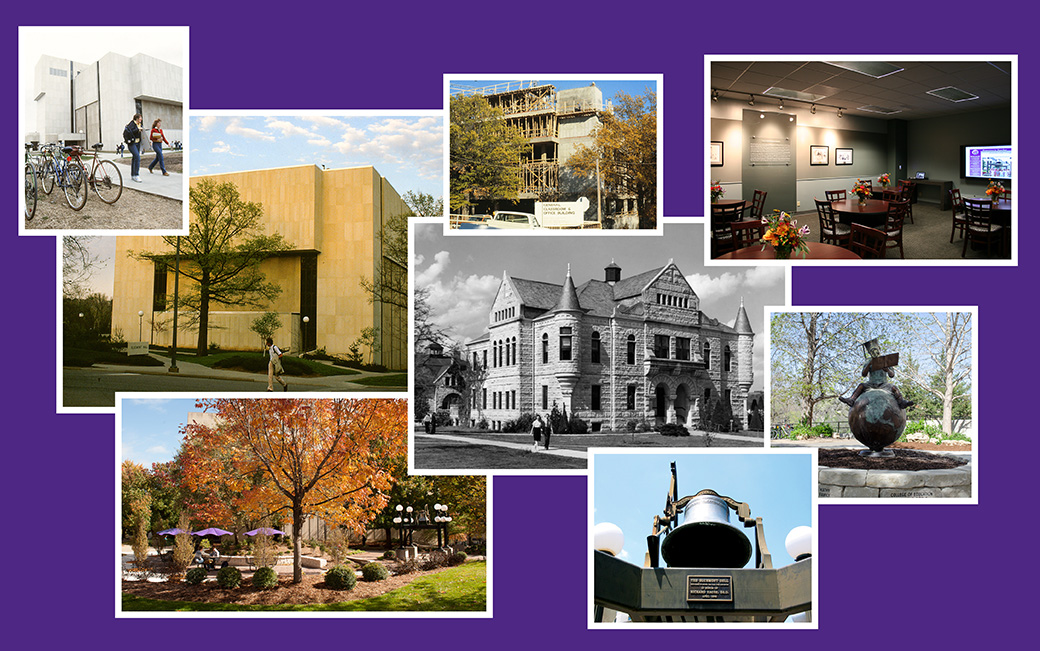 When the college began, its programs were implemented by faculty members in the departments of Curriculum and Instruction, Adult and Occupational Education, and Administration and Foundations of Education. Over time the college has consisted of three to six departments and for an extended period included a Division of Teacher Education overseeing departments of Elementary and Secondary Education.

The college has been administratively led by seven deans and six associate deans, supported by assistant deans and department heads. In the late 1980’s the college shifted to the first pervasive department chair model in the university with nine-month faculty selected for defined terms from the membership of the department.

From ditto machines and 8mm projectors, the college began modernizing its technology with computer equipment for support staff in the mid-1980’s. In 1990 a new initiative to provide all faculty and staff access to personal computers was begun with Apple chosen as the sole supported platform. In the mid-1990’s, mobile computer carts for student and faculty in-class use were provided. In 2012 significant new initiatives were instituted for the widespread use of iPads by faculty and students for classroom, research, and development work.

At the college’s inception, faculty meetings were called and run by the dean. In the mid-1970’s faculty members led a move resulting in the creation of a Faculty Assembly to conduct the academic business of the college, led by an elected faculty member. The Assembly mirrored the organization of the university Faculty Senate with three standing committees (Academic, Faculty, and Student Affairs). The evolving importance of two key priorities for the college led to the addition of standing committees for Technology and for Diversity for Community. Education professors have provided significant leadership to the university as presidents, leadership council members, and committee chairs of Faculty Senate.

Throughout its history, the college has hosted an array of centers to promote its missions. Several are administrative: Center for Student Success and Professional Services and Graduate Studies. Other major centers include: Center for STEAM Education, Center for Intercultural and Multilingual Advocacy (CIMA), Kansas Educational Leadership Institute, Center for Social Studies Education, Rural Education Center, and the Midwest Equity Assistance Center (decommissioned in 2016). An early entity, the Center for Economic Education, was reinvented within the College of Business.

Over the past 50 years, the college developed a range of initiatives to broaden its impact across the profession. Some of the most notable include: the Professional Development School model, the Executive Office of the National Academic Advising Association, the Office of Educational Innovation and Evaluation, the Leadership Studies program, programming for military-related families and children, the Kansas Educational Leadership Initiative, and second language learner programming through CIMA. 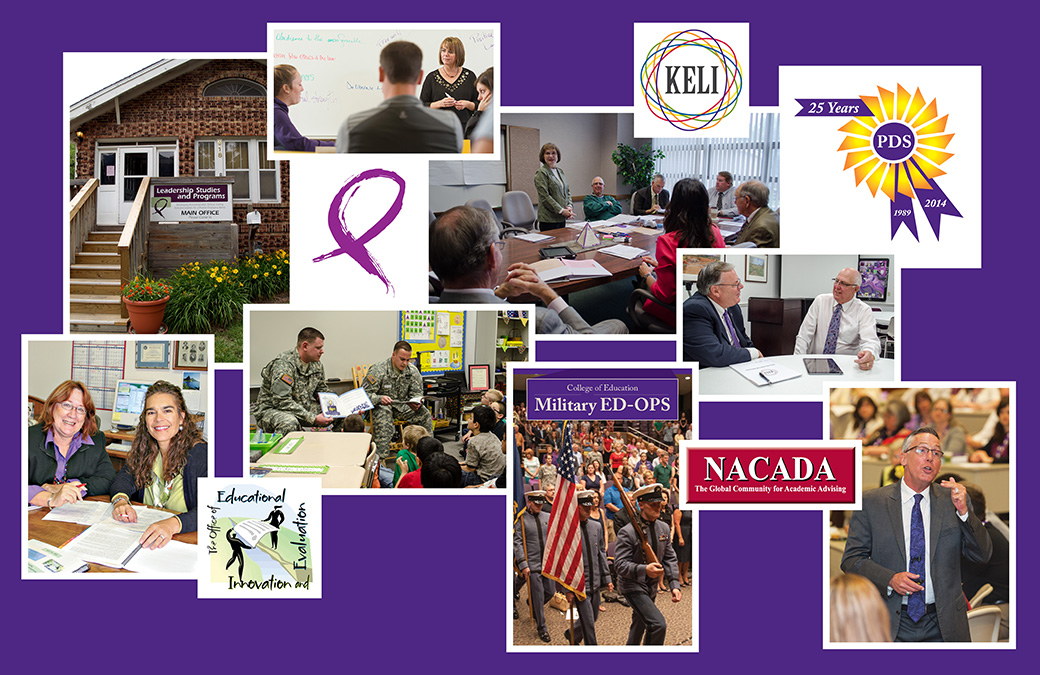 Beginning in 1971 with grant supported programming to provide opportunities for graduate education for African-American students, most from Historically Black Colleges and Universities, the college has emphasized the importance of diversity in the preparation of teachers and school and university leaders. Well over 200 African-American students have earned doctorates through the college. In the late 1990’s CIMA was created, significantly expanding the college’s role in the education of teachers of second language learners, many of them Hispanic; perhaps the most notable of these efforts is the BESITOS program. Programs and faculty members across the college have received university, regional, and national awards and recognitions for leadership in the promotion of diversity in education contexts.

The college was an early and strong adopter of distance education to serve the educational needs, particularly of graduate students, across Kansas and well beyond. Most early efforts involved face-to-face instruction in locations across the state; Adult Education in Wichita and Kansas City and Curriculum and Instruction in western Kansas (particularly Liberal, Garden City, and Great Bend). In the mid-1970’s special education faculty reached literally thousands of Kansas’ teachers through TeleNet. Across time, Educational Leadership faculty created the Leadership Cadre programs in collaboration with Topeka, Salina, Manhattan, and other school districts. Adult Education focused on providing M.S. preparation for officers at the Command and General Staff College at Ft. Leavenworth. On-line programming is now offered across the college with particularly notable enrollments and national impacts in academic advising certificate and M.S. programs.

In the earliest years of the college, men filled virtually all formal leadership roles. In the mid-1970’s the first two female Education faculty members were promoted to full professor. Subsequently, women in the college have served as department heads/chairs, assistant deans, associate deans, chairs of the Faculty Assembly, presidents, Leadership Council members and chairs of the university Faculty Senate, and directors of the Center for Science Education, OEIE, NACADA, CIMA, and KELI. In 2012 the college appointed its first female dean.

The faculty members of the college have initiated a variety of innovative projects across the years. Several involve curriculum projects in collaboration with important partners: Mesa Verde National Park, the Negro Leagues Baseball Museum, and the Voronezh Oblast in Russia. Kansas Careers was a long running program to assist Kansas’ public school students with career decisions. The Stock Market Game, coordinated by the Center for Economic Education, provided a framework for teachers in public schools to interest students in the working of American business finance. CIMA coordinated GoTeacher, a collaborative with the Ecuadorian government to prepare Ecuadorian teachers for ESL instruction. Professional staff members of the Catalyst have instituted an ongoing series of exceptionally high quality video programs related to first generation students, diversity, and military-related educational issues.

Faculty members and the programs they lead have been widely recognized locally and nationally with an array of awards and recognitions. Individual faculty members have been honored for their teaching, research, and service work, for promoting minority education and for significant contributions to their academic disciplines and organizations. College programs have received a wide array of university, regional and national awards for excellence in professional education.